Nuala accepts briefs in all areas of commercial law, but has special expertise in representative (class-action) proceedings and complex, high–value engineering and construction disputes.

She regularly appears in the Federal Court of Australia, the Supreme Court of New South Wales and in private arbitrations and in mediations.

Nuala was named “Junior Counsel of the Year, Australia” in 2013 by Lawyers Weekly, Australia.

Most recently, Nuala was listed as a Leading Junior in Legal 500 – Asia Pacific
‘ Nuala is sharp, agile and immensely hard-working. Her construction law expertise, including in complex issues of delay, disruption and quantum, is market-leading. A fantastic team player and a genuine pleasure to work with. A very diligent and clever junior counsel. Works very hard and is very responsive. ’ 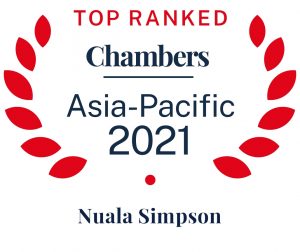